India is one of the largest countries with huge population there are hundreds of notable bridges that built with modern technology even some strong British built bridges exists in India. The river systems are flowing in the cities and which crossing between major places that needs to be built huge bridges for transport or connect. The Kolkata is the oldest city which was ruled by British and many great bridges were built over the Hooghly River and Ganga River in their Rule.

The Bridge lies between the green peaks located in Darjeeling district of west Bengal, is built across the Teesta River and one of the oldest bridge which opened on 1941 at the cost of 4 lakhs. The Coronation Bridge also called by locals as Bahgpool (meaning tiger bridge), the Bridge is the tourist attractions for travelers.

The Bridge Constructed on the Ganga River in Kolkata of West Bengal, which opened on 1992 and handles over 85,000 vehicles per day. The total length is around 822 meters and it carries two ways with 3 general purpose lanes in each direction. It has longest span of 457 meters with width of 35 meters, it became the longest cable stayed bridge in India.

Straight and one of the longget bridge in India with length of 5.57 km, opened to use on 1982 the Mahatma Gandhi Setu located in Patna of Bihar State, the bridge carries 4 lanes of roadway with width of 25 meters, is built over the Ganga River. 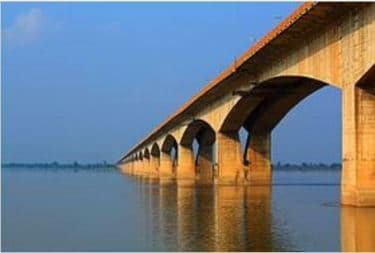 This is the railway bridge on single lane built over the Godavari River located in Rajahmundry of Andhra Pradesh, is opened on 1997. The total length of the bridge is 2.7 km with 28 twin arches which owned by Indian Railway. The bridge built in design of Bowstring Girder which is one of the longest concrete arch bridges in Asia.

The Hawrah Bridge built over the Hooghly River to connect Hawrah and Kolkata in West Bengal in 1942, it carries 8 lanes of Stand Road, is the sixth longest cantilever bridge with suspended span in the world. The Hawrah Bridge is the famous and notable symbol of the Kolkata city. With width of 71 feet and height of 82 meters it has 705 meters in total length.

It is the 880 meter long Cable stayed bridge built on the Hooghly River in Kolkata in 2007, with 7 spans and width of 29 meters, and the bridge designed to carry around 48,000 vehicles per day. The Nivedita Setu is built to replace the Vivekananda Setu which just 50 meters downstream of the bridge that still exist as that becomes weak.

The bridge connect Bally and Dakshineswar built on Hooghly River in the state of West Bengal, the bridge constructed on 1931 and presently dangerous to use as it become weak and difficult to repair. The Vivekananda Bridge holds both rail and road traffic and the total length of the bridge 880 meters.

The Chenab Bridge is the arch rail bridge, is under Construction Bridge and ready to launch in 2015 for Kashmir Railway, It has 17 span and total length of 1,263 meters, the bridge is extremely high above the water at 359 meters and it will be the highest rail bridge in the world once construction is completed.

Jubilee is one of the oldest bridges in India which opened to traffic on 1887, is Rail Bridge built over the Hooghly River which connects to Naihati and Bandel. Jubilee is the steel arch bridge that still strong in the present days.

There are many Bridges with cool structure and brilliant technology that could be exist somewhere in India, here we have 10 top or best of them.