The Palm Jumeirah is Completed and sold their Apartments, Villas and other Commercial Centers built in it, Other Artificial Islands mentioned below are will be completed soon or under construction or Cancelled or Delayed or Hold.

The Palm Jumeirah is an Artificial Island by Nakheel Company owned by Dubai Government. There are three Projects that look same as this island. It is located on the jumeirah coastal area of the emirate of Dubai, and is in the shape of Palm tree. This Palm Island covers 5 by 5 kilometers and the total area is larger than 800 football pitches. This island includes Hotels, Resorts, Apartments, Villas and other entertainment buildings. Total cost to build this island is 13 billion US$ and 40,000 workers have been involved in the construction.

This is the Artificial Island in the shape of Palm tree and began construction in October 2002. This Island is 50 percent larger than the Palm Jumeirah. This island includes six marinas, a water theme park, homes, villas, apartments. This Island will house to more than 250,000 people. This is one of the projects by Nakheel Company. 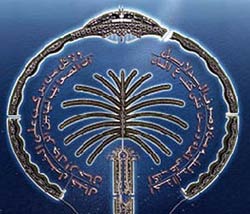 This is under construction project and announced development in October 2004. This project is many times larger than Palm Jebel Ali. If the project is completed, this will be the largest artificial island in the world. The 80 percent of front reclamation was completed in April 2008. Since 2008 the project is on hold. 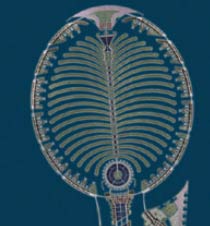 The World Island (Cancelled or Delayed)

This island constructed in the shape of a World Map with various small islands. The island is in the archipelago range from 450,000 sq ft in area. The World’s overall development estimated cost at 14 billion USD. 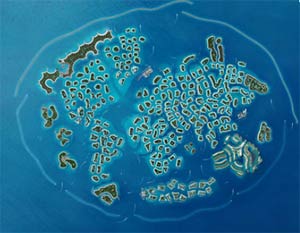 It is the multipurpose maritime zone, 85 percent of the project completed and expected to be operational by 2012. The total area of 2.27 million sq meter is home to Maritime Center, the industrial Precinct, The Marina District, The Academic Quarter, The Harbor Residence, and the Harbor Office. 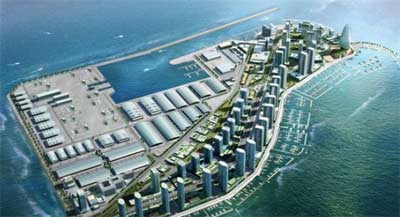 This is the Artificial Island in the shape of Milky Way Galaxy and Solar System, This project was announced in 2008 and to be completed between 2023 and 2028. Currently the Universe Project is on Hold.  The universe will have 3,000 hectares of land and it takes 20 years to build. 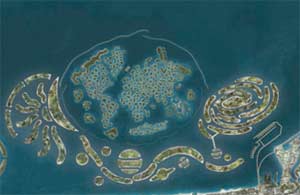 This island covers 14,000,000 sq meters, this Garden city aims to cater to a population of 60,000. The project total cost approximately 350 billion dinar. The development Consists 12 districts and whole phase will be fully ready in 2013. 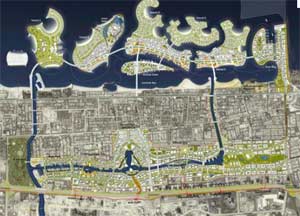 It is the development for the purpose of mixed use and covers approximately 90 hectares. The Project consists land of 1.8 km long and 400m wide.

This was expected to become the largest man made development and artificial island in the world. This project expected to house estimated population of 1.5 million people. 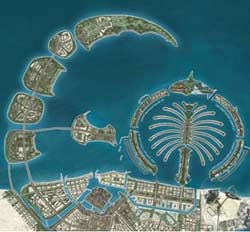 Top Largest Building in the world by Floor Space