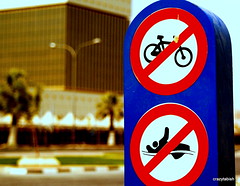 Traffic Violations in Qatar is ends with huge fine and imprisonment, added new rules and regulation to the limit of traffic and set up of Hi-tech cameras, Radar detectors. Qatar is one of the countries in Gulf and Richest, Doha is the largest capital of the country with large population, so every day rush hour for traffics, According to 2010 computes 226 people lost their lives in traffic accidents in Qatar. Qatar Government has rules on traffic violation that similar to other common rule of other Countries. There is option for Online Application for paying fines for traffic violations. The New laws out in November 2009 for Traffic Violations officially and they added point system to take violators to imprisonment and cancel their License.

The Fines and Penalties are huge, if you beat traffic Red light the charges of fine is 10,000 to 50,000 QAR Or 3 Years Imprisonment, sometimes both fines will be charged. The Traffic rules such as Beating the traffic rules and regulation that causes cancellation of License and imprisonment for long time. The Government added many New Hi-tech systems for identify the fault who Violates the Traffic Rules in Urban Areas of Qatar.

The Following list of Rules is the Official of Qatar Government of November 2009.